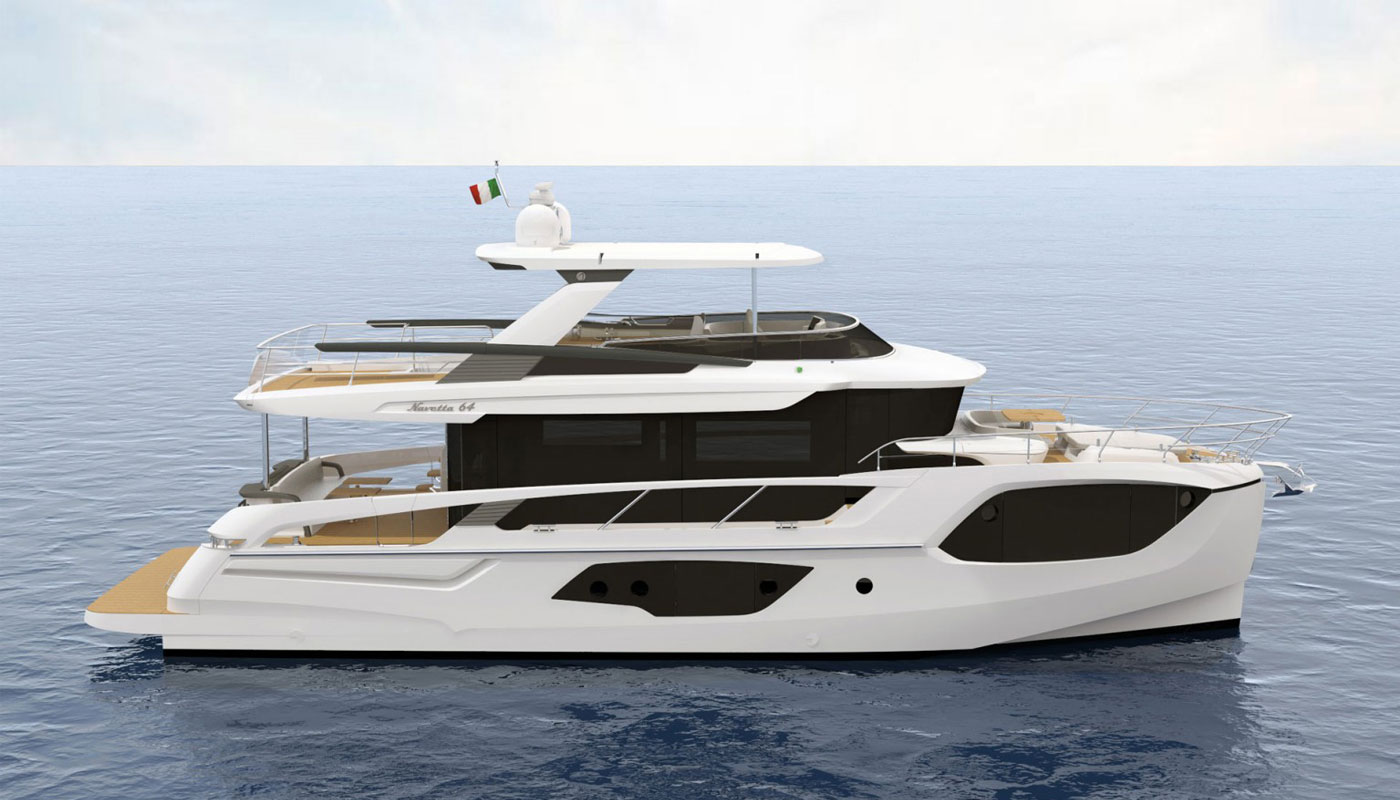 A few days ago, during the Boot Düsseldorf, the Absolute World Press Conference took place. This was the occasion where the new Navetta 64 has been firstly mentioned: she will be launched during the next Cannes Yachting Festival 2020 and she will be the latest born sister that completes the already rich Navetta range, aiming at the needs of a specific customer target.

Even if she is the latest born of the family, she is a Navetta, and you feel it. But she is not just a “redesigned” Navetta, the new Navetta 64 is a new boat, that has been creating once again something extraordinary.

Cesare, which are the main features of the new Navetta 64?

Some novelties, that we could consider in line with the current trends, have aimed to chromatic choices, to the line of the new side windows, inspired by the Navetta 48, to the enlargement of the bow windows and to a different windscreen’s inclination angle; these interventions may seem ordinary, but rather they represent the result of specific choices, that we take with our mind clear, as we love to do, without preconceived ideas, without setting prior technical boundaries. We choose what to do, and then we find a solution to do that.

For example, the enlargement of bow windows goes through a very challenging gluing match method between hull and deck, which is the result of our technical departments’ inventions.

Which are the strongest novelties?

The side wale in the cockpit has been opened, in contrast with what usually happens, where the wale has a minimal structural meaning. It may seem a minor feature, but in this way, we have a floor area extension of 60 cm along the entire length and when you are sit in the cockpit, you have the direct view over the sea from below the railing and not above it… great, isn’t it? And what about the transom?

The stand version of the transom has two windows and a pantograph central door, same as on board other Absolute Navettas.

The optional version, that we have called “Beach Club”, offers a full windowed transom, with two side fixed doors and two sliding doors in the middle. The result is that we have the possibility to create a living space inside, not just a storage.

Considering also the finishing, it is in fact an additional VIP cabin, but with a glass window at the water’s edge.

Moreover, the door is not a simple door, because in order to properly operate in this area it should be watertight. So, it should not simply be “waterproof” but “watertight”. We have therefore developed a pneumatic gasket that is waterproof while resting: while navigating, by pressing a simple button, you can activate a compressor that inflates the gasket, which expands and watertight adheres to the metal frame … and the watertight door is served! Let’s talk about the three cabins

In addition to the aft VIP, there are 3 other double cabins, two with double beds and one with twin beds, each with its own toilet; the standard crew cabin is with a single bed, but can be equipped with a second “pullman” bed, that can be folded-away. For the owner’s cabin we have reiterated the solution adopted on Navetta 68 and 73; the position at the bow has allowed us to provide huge windows that give an incomparable view of the sea, but also a quietness and absolute privacy compared to the owner’s cabins of any other 64′.

Here the bathroom is located at the extreme bow area, full beam, a solution not adopted by many, but that offers you a large bathroom with equally generous windows on both sides. It’s a bathroom that, at first glance, even for us it was hard to believe we were able to do. Cabin and bathroom are coplanar, so there are no steps. The second VIP cabin, in addition to the aft one, is at the center of the boat, with double bed, large window on port side and its own separate bathroom; on starboard side we find the guest cabin with twin beds, with a large window as well. Each of the two has its own head, the latter also serves as a day head and therefore has two access doors, one from the cabin and one from the central companionway.

A special feature of the layout is represented by the huge wardrobe/laundry storage under the owner’s cabin, at full height, with clothes hangers, drawers, cabinets, laundry and a “tailor-made” box for Dyson vacuum cleaners.

From here an additional door opens to the area below the foredeck, for inspection of the bow thruster, winch and other electromechanical equipment serving the domestic functions of the owner’s cabin.

Also on the lower deck we find the crew cabin, which can be accessed through a side door directly from the starboard side walkway, therefore the captain can go from the engine room to the aft platform, and from there to the side walkway and enter his dedicated area (or disembark from the side door), without entering the saloon or other convivial areas.

Inside the crew cabin, through a separate staircase, we have a separate toilet, wardrobe, table that can be transformed into a bed and possibility to install a second “pullman” bed.

Height, shape and size of the bed, are absolutely worthy of a larger boat, made in an “easy and effective” aft layout, without sacrificing anything: absolutely not trivial.

Finally, considering that the crew cabin borders on one side with the guest cabin and on the other with the second VIP cabin, we have added extra absorbent soundproof material on the boundary bulkheads like the one in the engine room, to create maximum privacy between guests and crew.

Obviously, the galley towards the aft, with total opening on the cockpit, to create a unique environment and enjoy a practically doubled space.

A very large aft terrace on the flybridge, central area with “wet bar” – which is an actual galley – equipped with, icemaker, barbecue, sink, cabinet for dishes and crockery, large teak table, central piloting place and two side L-shaped sofas, to drive surrounded by friends, in total safety.

The hard top has a soft top that can be opened, an increasingly popular solution in Europe, and a perimeter guide – with the help of a transparent cover on request – allows you to close the flybridge in order to gain the use of the fly during non-summer months! The Volvo Penta D13 engine comes in two configurations, both within the IPS 30 range, namely 1200 and 1350; basically, there is no need for the 1350, but if the owner’s choices are to permanently host a large group of guests and their luggage as well as heavy accessories, such as jet skis and tender, gyroscopic stabilizer and so on, then we will have the right solution to offer.